Summary: The 1921 Depression lasted 1 year when Washington did nothing. The 1929 Depression lasted 10 years because Washington intervened (like it's doing now). The current crisis was caused by the Federal Reserve and will last 15 years. End the empire. Bring the troops home. Cut spending. End the Drug War. The Republicans have lost credibility and so will the Democrats.

Amazingly, this man was shunned in favor of John McCain and, ultimately, Barrack Obama.
Posted by Good Will at 7:30 AM No comments: Links to this post 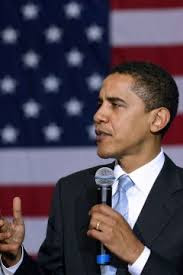 This week President Obama unveiled his
$75 $275 billion "Homeowner Affordability and Stability" plan. Thus we see the danger of allowing leaders with NO BUSINESS OR LEADERSHIP EXPERIENCE to rule over us in Washington!


PRESIDENT OBAMA: "My administration will continue to support reforming our bankruptcy rules so that we allow judges to reduce home mortgages on primary residences to their fair market value, as long as borrowers pay their debts under court-ordered plans."

Why would someone lend money to buy a house if they knew that a judge could later alter or void the contract (lower the principal to be repaid, reduce the interest to be earned, lengthen the period of repayment, etc.)? If I had $250k to lend, would I risk lending it to anyone who could effectively STEAL it by government fiat? Of course not!

This plan will effectively dry up private investment in home mortgages, making the federal government the defacto "owner" of homes not purchased outright with cash.

As The Heritage Foundation reported:


The plan treats borrowers who sacrificed to pay their mortgages on time the same as those who used their equity for a boat and stopped paying their loans. This moral hazard sends a clear message to our children that they can avoid the consequences of their actions. But this is only one reason the plan is bad policy. Others include:
The plan’s mortgage cram down provision would only worsen the housing crisis in two ways: First it would increase the risk to lenders and lead to higher interest rates for people trying to buy homes today. Second, the policy would open the door to achieving mortgage reductions for tens of millions of homeowners who can afford their mortgage pay­ments and whose homes are not at risk.
The plan will fail because too few people will qualify and many of those that do will default anyway. The housing bubble was caused in large part by speculators who bought homes planning to flip them for quick profit and other who out right lied on their loan applications. The mortgage bailout will do nothing to stop these foreclosures. Furthermore, the re-default rates for people that have already participated in mortgage modifications show that as many as 50% of them go on to default again.
The plan risks another $275 billion in taxpayer funds. The Obama Administration claims their plan will only cost $75 billion, but that is only true if it works out perfectly. If the plan fails to stem the inevitable correction in housing prices taxpayers will lose a full $275 billion.

This is our wise leader's "solution" to the housing crisis? The destruction of capitalism, contract law, and the free-market system?

Where does our Constitution authorize the President and/or Congress to insure "equality of outcomes" for all? It doesn't! Our leader's "plan" is merely the central tenet of Karl Marx's socialist dream!

In the "real" world, when someone crashes and burns, "scavengers" pick up the pieces. Those who make unwise investments or suffer calamitous misfortune often are forced to sell off their assets to satisfy their debts. (Anyone who has played "Monopoly" knows this!) In our capitalistic system, one person's "loss" becomes another person's "gain".

However, if insanely inflated home prices are forever maintained at their lofty heights and never allowed to fall, the current "poor" (including those with now-reduced incomes) will still be precluded from owning a home. Likewise, those who did the right thing -- by scrimping and saving and assiduously avoiding going deep into debt -- will still be locked out of the home-buying market. Under President Obama's plan, those now maintaining untenable ownership of their homes will continue to do so on the backs of those who cannot even afford to buy a house! What fairness! What equality!

President Obama's plan rewards bad behavior and/or those who bit off more than they could chew. What next? Will he pass a law that rescues everyone who makes a bad investment or who falls on misfortune for whatever reason?

Why should I (and my posterity) be forced to pay my neighbor's unwise/ridiculously high mortgage? I not only have to live within my own means, but now his as well?

Wouldn't the BEST "plan" be to allow home prices to fall (and people to relocate) -- so that others could afford to own a house again? Maybe even (gasp!) pay cash for their next home?

Yes, many of us (including my family!) may be displaced. That's what happens when people lose their jobs and can't pay their bills -- especially when they are hopelessly in debt! My gosh! Government-prodded banks were issuing 30-year (and even 40-year) interest-only, 100%-financed jumbo home loans to janitors and cafeteria workers! Talk about reckless lending practices! Talk about indentured servitude for life!

Now I must pay for such foolishness and greed? Apparently, yes.

ALL OF AMERICA has been encouraged to live beyond her means. We have become a nation of debtors. Now it appears those debts cannot be repaid.

Our leader's plan foolishly throws more money into the fire, futilely postpones the inevitable, and cruelly locks us even deeper into debt that our children and grandchildren can never hope to repay.

Our Collapsing House of Cards 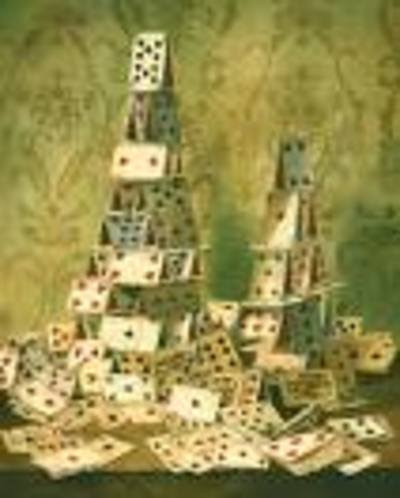 We came this close to a total economic melt down September 15th. (Watch the video. The explanation comes at 2:20 into it.)

What should we learn from this? We should learn:
My recommendations? What do I know?! I'm no prophet or economist! I can't see into the future (clearly). "The rules" don't apply anymore! Because NOBODY in Washington, D.C. or Sacramento, CA, is playing by "the rules"! So the "unexpected" has to be expected!
Because there is no "tomorrow".

The rich are "milking" the system, trying to get the last drop from this sagging teat before the cow finally keels over! (Who knows what creature will emerge to devour her maggoty carcass?) But the rich are afraid. That's why they're paying themselves first...with our "bail-out" money...while the money's still worth something! They know the jig is up. And they're running for cover! NOBODY is going to start a new business in this climate of over-taxation and over-regulation that punishes success to reward failure.

And the Government, of course, is NEVER at fault. Only the people. The die-hard converts to communism can see no wrong in their systems or schemes. It is only the selfish, capitalist "unbelievers" who have thwarted all their plans in the past. "Communism" (or socialism) "has failed everywhere it has been tried NOT because it is a failed system", they mutter, "but it has failed only because no one has tried hard enough to make it work!" The world will make ONE LAST GREAT PUSH to make it work, once and for all, on a GLOBAL scale.

And that push, inevitably, will fail miserably.

When will it occur? I don't know. But EVERYONE should see it coming! If we survive -- with our morals, faith, and families intact -- it will be by the skin of our teeth.

I, for one, do not wish to repeat the missteps of the Stalinists, the Maoists, the Nazis -- or even of modern Europeans! Heaven forbid, how is it that "communist" China today has become more "capitalistic" than the United States of America?! They are now loaning US money!

HOW FAR HAVE WE FALLEN??!

To my friends and family (or ANYONE ELSE who will listen), I would recommend the following. (This advice will serve you well, no matter what comes our way.)
EVERYTHING you buy NOW (with cash) will be worth MUCH MORE than what you paid for it SOON. Even your house will eventually GO UP in apparent "value"! (However, if you buy it on credit, you may not be able to keep it, because you might not be able to make the payments!) The TRILLIONS we are pumping into our economy now WILL devalue our currency. That MUST happen. (Fortunately, not ALL "the rules" have been suspended! Some cannot be broken!) You will see "Happy Meals" going for $4...$5...$8...$10! It's already starting! Prices are shooting up everywhere! And yet the government claims there's no (or only modest) inflation. Phewy! Americans will be SCREAMING about inflation -- even as they watch their home values continue to plummet (at first) along with their salaries and job opportunities (at least, for now). Goods and commodities may become scarce.

I hope they don't. But, if you have what you need to survive, even if you lose your job, you won't lose your life.

And you won't be forced to "pledge allegiance" to a demagogue or to an economic system that is doomed to fail. (At least not for another year).

And THAT will give us time to organize.
Posted by Good Will at 11:49 AM No comments: Links to this post