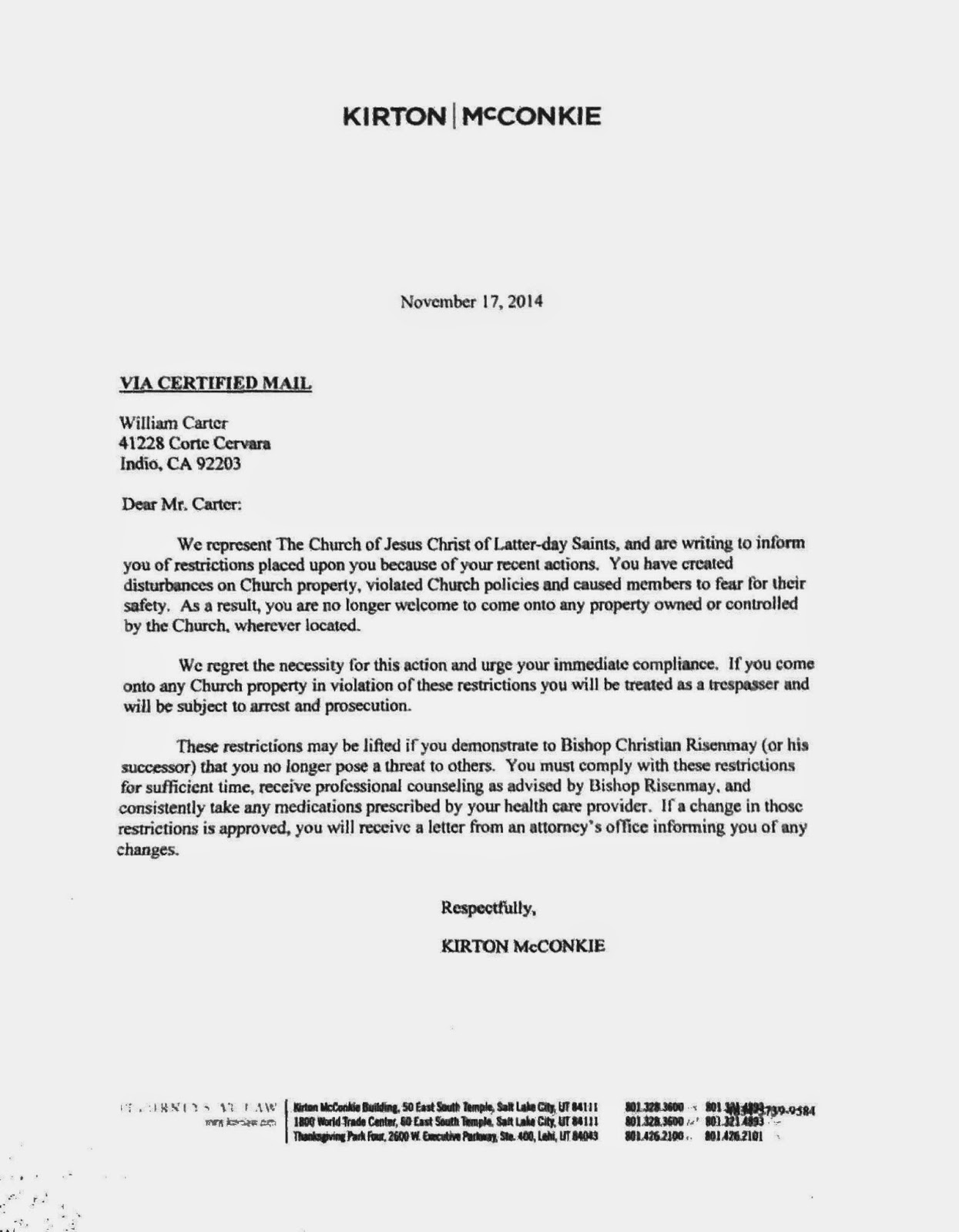 Two high priests from The Church of Jesus Christ of Latter-day Saints came to my door this afternoon. I invited them in, but they declined, saying they were there to deliver a letter "in private".

Right there. On the doorstep.

So I shooed the kids inside and closed the door behind me.

The last two "messengers" the Church sent (eight months ago) delivered a letter that summoned me to a "kangaroo" court where they stripped me of my membership.

I scanned the first paragraph:

"As a result, you are no longer welcome to come onto any property owned or controlled by the Church, wherever located."

I had already pondered the implications of a global restriction, having been given the "heads up" by Bishop Risenmay two Sundays ago.

Imagine sending your children to a church where you are not welcome...and never allowed. How would you describe such a church?

How would you feel about belonging to a church that treated your family and friends that way?

It's an unimaginable blasphemy.

"Do you even read the scriptures?" I asked one of them.

He was my friend. Our families had spent serious time together (several years ago). I genuinely loved the guy! He was on the stake high counsel that excommunicated me and the only one who sat beside me and comforted me (with cheerful banter and genuine support) during that ordeal. He tried to encourage me: "Don't worry! You'll be back in no time!" He clearly didn't understand the enormity of what was transpiring.

A month ago he confessed he hardly ever studied the scriptures. "Not enough time!" he lamented, "I really need to study more." He didn't seem the least bit interested in the respectful doctrinal discussion I was having with another member of the stake -- even though he knew I had been excommunicated over doctrinal concerns. He turned a deaf ear to our conversation, perhaps thinking: "Better not get involved."

I summarized the following verses for him:

31 But if he repent not he shall not be numbered among my people, that he may not destroy my people, for behold I know my sheep, and they are numbered.

32 Nevertheless, ye shall not cast him out of your synagogues, or your places of worship, for unto such shall ye continue to minister; for ye know not but what they will return and repent, and come unto me with full purpose of heart, and I shall heal them; and ye shall be the means of bringing salvation unto them. (3 Nephi 18:30-32.)


"How can I return and repent," I asked, "when you won't even tell me what I've done wrong?"

"You've been told many times."

He wouldn't elaborate. (Of course he wouldn't!) Instead, he remarked about my demeanor:

"You don't seem very humble...You haven't been humble for a long, long time."

"How am I supposed to be humble when you keep persecuting me?!"

I knew I didn't look or sound humble. What does a "humble" person do? I could use some (more) humility.

The truth is: I don't suffer bullies and thieves well. (My inclination is to beat the crap out of the bullies and bring the thieves to justice!) These people -- not the guys I was talking to, but the ones they "work" for -- were stealing both my church and my religion.

I guess if it were possible for someone to take away my church and religion from me, then I ought to let them have them. As they say: "You can't take it with you!" And if they could take these things from me, then they weren't mine to begin with and certainly nothing "eternal". In other words, nothing to get mad about.

A friend of mine expressed his own concerns to me at Church this morning:

"There is a schism forming," he said. "The bishop of [he named a ward] stood up and told his congregation not to go to LDS.org anymore because they teach false doctrine there!" He described what's happening in the Church today as "tyranny". He urged me to teach my children how to survive in a world -- and Church -- fraught with tyranny.

"Types like this," he said, naming several political and genocidal despots of the recent past "arise in every generation and organization. You have to learn to deal with them. If you don't, you're dead. If you want to survive, you've got to learn to keep your mouth shut and your head down. That's what I do!"

"That's un-American," I said. "Americans don't submit to tyranny. I'm going to teach my children to stand up and speak out!"

"I would rather they were dead than acquiesce to tyrants."

I was mad at the blasphemy of it all! These guys (the ones on my doorstep) were just cogs in a machine, doing what they were "programmed" to do. "We're just the messengers", they said.

But I wanted true messengers.

I reminded them that, in three and a half years, not one of them (or their leaders!) had ever visited my home to instruct me in correct principles or doctrine. If I had gone astray, why didn't they visit me?

"We've not even had a hometeacher!" I told the pair, "But you've already come to my home now twice to cast me out?"

Such was a sickening perversion of priorities, in my opinion.

We went back and forth a few times, talking in rancorous circles. It was obvious these two were sent, not to solve problems, but to get rid of one: me. They were sent to deliver their letter and to let me know "there would be repercussions" if I showed up at Church again.

What type of repercussions?

"If you come onto any Church property in violation of these restrictions you will be treated as a trespasser and subject to arrest and prosecution."

This letter was dated November 17. My wife told me yesterday a certified letter from Utah had been sitting at the post office since November 19. (She just found out. We don't check our mailbox very often. Who does anymore?)

Ironically, I've been attending church with my family -- unaware of this "prohibition" against my doing so -- for the past two Sundays...three, if you count the day Bishop Risenmay threatened me, saying it was "out of [his] hands now".

That pretty much sums up what the LDS Church has become: Distant. Impersonal. Imperial. Legalistic.

I attended church these past several weeks as an unwitting "trespasser" and no one said a word. Not the bishop, who obviously knew. Not the bishop's first counselor, who shunned me. Not the 1st counselor in the stake presidency, with whom I shook hands this morning and said hello. (We went to school together!) Yet he never said a word.

These aren't my friends. They aren't even my brothers. I don't know who these people are.