Polygamy and the Joseph Smith Papers

The Joseph Smith Papers include "all manuscripts and documents created by, or under the direction of, Joseph Smith, Jr., the founder of the Latter Day Saint movement." LDS Church leaders (and others) have been "sitting" on these papers, many for generations, ostensibly to protect them. (But also to protect themselves.)

For a "living" church touting its own historical accuracy, doctrinal purity, and divine authenticity, withholding "evidence" that would substantiate or refute such claims seems disingenuous. So the LDS Church has been forced to open its archives.

Beginning in 2008, the Church agreed to release some 20 volumes of Joseph Smith's papers for publication over the next several decades. (Perhaps this "dribble" of information over time, some thought, would dilute its impact.) Sales of those first few volumes, however, vastly exceeded Church leaders' expectations. Similarly, they underestimated the impact those papers would have.

After all, aside from a few historians, most Latter-day Saints (including the Church's leadership) NEVER seriously study church history and virtually no one knows what's in the Church's archives.

And there's the rub.

The information thus far released has been very damning to the Mormon hierarchy. The Church's "official" narrative does not "square" with the evidence or withstand scrutiny.

(There is no "going back" after reading these papers, folks! They positively burn the house down. Perhaps the Church is counting on the fact that, by sheer dint of volume, few will read them!) Church "scribes" are furiously pumping out footnotes and equivocations to "explain away" the evidence.

Official LDS records show that Mormon leaders (with the possible exception of Joseph Smith) lied about polygamy, altering records (including scripture) to justify its practice. (I believe LDS leaders have also lied about claims of "priesthood ordination" and the restoration and transmission of authoritative "keys", but that indictment awaits another day.)

Dan Pratt, on Facebook, had this to say recently:

This is one of the best things that has ever come out of the Joseph Smith Papers project. It shows blatant revisionism of Church history and you can see it with your own eyes. 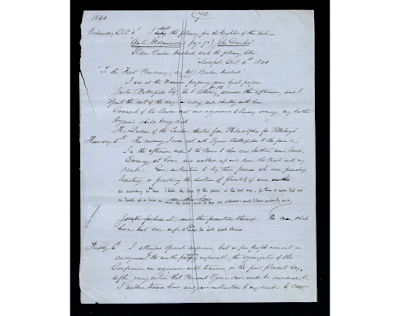 You can tell that this document originally said, "Evening at home, and walked up and down the street with my scribe. Gave instruction to try those who were preaching, teaching, or practicing the doctrine of plurality of wives. On this law Joseph forbids it, and the practice thereof. No man shall have but one wife."

You can also tell that the document was clearly revised to say something very different: "Evening at home, and walked up and down the street with my scribe. Gave instruction to try those who were preaching, teaching, or practicing the doctrine of plurality of wives. for according to the law I hold the keys of this power in the last days, for there is never but one on Earth at a time on whom the power and its keys are conferred ­and I have continually said No man shall have but one wife at a time unless the Lord directs otherwise."

You can also see the note on the left side that says, "to be revised".

Wow. Just wow. Joseph never practiced polygamy and continually fought against it. Those who inherited Joseph's position after his death worked to change Joseph's teachings. That tradition of apostasy continues today. I encourage everyone to learn about the restoration of the Gospel as Joseph Smith taught it. I'll put some recommended reading in the comments.


You need to click on the link above to see the document clearly. The alterations to the original journal entries (themselves copies) have been made with different handwriting. This is a deliberate effort to "change" (not preserve) history.

In his blog, Pure Mormonism, Rock Waterman showed that Joseph Smith consistently denounced polygamy. Likewise, Denver Snuffer explained that Joseph and his brother, Hyrum, were killed and Joseph's name was "had for both good and evil" because his teachings were corrupted, misapplied and misunderstood by his contemporaries, including those who "followed" him.

In short, the church and religion Joseph founded quickly foundered, falling into apostasy (like almost every other gospel dispensation, including Jesus').

In far greater detail than can be explicated and referenced here, both Denver Snuffer's "Passing the Heavenly Gift" and Rob Smith's "Teaching for Doctrines the Commandments of Men: Tradition in Modern Mormonism" reveal how far removed modern Mormonism is from the foundational characters, experiences, teachings, doctrines, practices, organization and faith of its original adherents.

I believe the record shows that Joseph Smith engaged in "sealing" ordinances and "plural marriages" not for this life, but for the next. He "sealed" men and women together with the intent that they might be future fathers and mothers, sons and daughters, brothers and sisters, husbands and wives, friends and neighbors -- for the mutual benefit and eventual salvation of all so gathered and organized.

Not even Brigham Young, apparently, grasped the full import of Christ's teachings. In Christ, life goes on! Men are as grass. Their flesh is weak. To be carnally minded is death, for the body withers away and dies. But, by the grace of Christ, those who believe and follow Him may live again! They may be born anew!

Joseph believed this and acted accordingly.

It would appear that the "doctrine" of "plural marriage", "celestial marriage", "plurality of wives", "spiritual wifery", sealings and the like, including the "continuation of the lives", was misconstrued, perverted and misapplied by Brigham Young and his sycophants. They evidently secretly engaged in carnal polygamy and taught others to do likewise -- something both the Book of Mormon and Joseph Smith roundly and consistently condemned (with one exception).

The general practice of polygamy by LDS Church leaders was kept hidden from the world -- apparently even from Joseph Smith and the main body of LDS believers! -- until well after Joseph and Hyrum's deaths and the "Brighamite" faction of the LDS faith was relocated well outside the confines of the contiguous United States (in Utah Territory).

In fact, John Taylor -- almost killed, as well, with Joseph and Hyrum in Carthage Jail -- actively preached against polygamy while on his mission to France, evidently lying to potential converts and Latter-day Saints alike, saying Mormons never practiced it...even while he himself was a practicing polygamist!

How do Mormons reconcile these facts or make any sense of the evidence? (Most don't. They don't even try.)

Not until the 1850s did Brigham Young consent to reveal to the "average" Mormon that their leaders were, in fact, polygamists. At that time, he also elevated the practice of polygamy from "optional" to "required for salvation".

The latest (LDS) "iteration" of "Mormonism" has long since repudiated and disavowed many of Brigham Young's doctrines, teachings and practices (including polygamy!). The Lion House tour in Salt Lake City has now been altered to conceal the fact that Brigham Young was ever a practicing polygamist! (So much for LDS leaders never leading the Church astray!)

Things don't look so good for Brigham Young now. (See 2 Nephi 28:9-15; also JST Matthew 5:21.) Under his (mis)leadership, Mormons embraced a practice which the church no longer justifies or sustains, but has repudiated and abandoned. The Lord condemns idolatry, adultery, whoredoms, priestcraft, and abominations in the form of adulterated, unauthorized and innovated ordinances and doctrines. (See Isaiah 24:5.)

Is not the shifting sand of polygamy the very foundation upon which the LDS religion was built? Did not the faith's prophets testify it was "essential for salvation" and would never be ended? And, yet, the Church now says "it's not" and "it has".

Even so, polygamy's practice was not eradicated from the LDS scene until well into the 20th century. (Mitt Romney's own grandparents were practicing Mormon polygamists!) Yet the "doctrine" still permeates Mormon minds and hearts today.

How can a young man resist contemplating -- even aspiring! -- to have more than one wife simultaneously while his own faith teaches that historically it was rightly done and will be practiced again hereafter? What prevents one from embracing polygamy now when his own faith's leadership once touted it as "essential" and "everlasting"? Has Jesus Christ or His gospel changed? Has the Lord's church gone astray? Heaven forbid! (To the "faithful" Mormon mindset.)

But the Joseph Smith Papers reveal that LDS leaders have been "lying for the Lord" (and lying to their own people) for generations about the origins and legitimacy of polygamy -- since well before Joseph and Hyrum were killed. Consequently, the LDS Church's "official" claim to being lead directly, inerrantly and continuously by God Himself since that time is bogus and dishonest: as dishonest as the paper you see altered right before your eyes!

THE JOSEPH SMITH PAPERS PROVE THAT THE LDS CHURCH'S HISTORY, DOCTRINES AND TEACHINGS HAVE BEEN CHANGED to conform to the Church's modern historical (and largely fanciful) narrative. Publicly questioning that narrative -- even in light of the Church's own evidence! -- can get you excommunicated from the faith today.

With regard to polygamy, the Church doesn't have a leg to stand on. Its founding leader (Joseph Smith) unequivocally denounced the modern practice. (Either he was lying or telling the truth.) Polygamy's "champion" and "prophet", Brigham Young, nonetheless supported polygamy (and secretly practiced it), despite Joseph Smith's condemnations. Brigham claimed that Joseph received a revelation authorizing Brigham and others to be polygamists.

But the evidence speaks otherwise.

If polygamy is a divinely-appointed, unchanging principle of salvation (rather than a vestigial cultural practice embraced by some), then the LDS Church abandoned the practice without any modern revelation from God authorizing them to do so (Wilford Woodruff's "advice" notwithstanding).

If polygamy is unauthorized today, then the LDS Church embraced it in direct violation of God's written commandments and Joseph Smith's clear teachings on the subject.

Either way, the Mormon church is screwed.

In short, the Joseph Smith Papers demonstrate that the LDS Church is not, as it pretends to be, guided by continuous, unambiguous and infallible revelation from heaven, but, rather, is beholden to the fallen, fallible traditions and leadership of men. (The Church can't have it both ways.) If anything, the Church's leadership is of the sort one might expect from any telestial organization: for better and for worse, but inevitably damning. (See Doctrine and Covenants 76:98-112.)
Posted by Good Will at 6:00 AM